← back to
iapetus
Get fresh music recommendations delivered to your inbox every Friday. 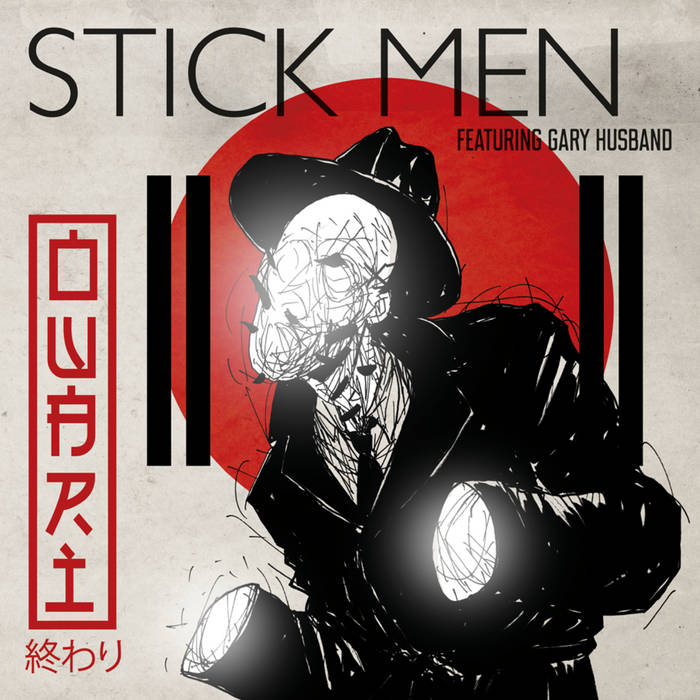 Carsten Pieper I really missed out on MoonJune Records this Bandcamp Friday, oh my... 8-O
Unintentionally though, because I seem to have bought this document of Stick Men's ill-deemed 2020 Asian tour by the Markus Reuter connected Iapetus label (which, of course, is worthy our attention and bucks, as well). Anyways, great show, as could be expected by this formidable trio with guest Gary Husband on piano adding a special dimension to the Stick Men repertoire. Favorite track: Schattenhaft.

In middle of 2019, Leonardo Pavkovic of MoonJune Music was constructing plans for a whirlwind Asian tour in the early part of 2020 of Stick Men. The band – comprised of the legendary King Crimson veteran battery of Tony Levin (Chapman stick) and Pat Mastelotto (drums, acoustic and electronic percussion), and the budding uber-genius composer and touch guitarist, Markus Reuter – was excited about the prospects, as the tour would include four nights in China, where they had never previously performed. The prospective itinerary they drew up also included four nights in Japan, as well as a stop in Hong Kong.

Little did "Mr. MoonJune" (Leonardo Pavkovic) or any of the band members realize the fate which would soon befall the tour. Firstly, in November 2019, the Hong Kong promoter was forced to postpone the show, due to the growing political unrest which engulfed the city. Then, in early February 2020, Blue Note China cancelled the scheduled shows in Beijing and Shanghai due to the rapidly spreading Covid-19 pandemic – further complicating matters of both finance and travel logistics. And a lucrative Asian tour was reduced to a four-night blitzkreig of Japan: Blue Note Nagoya (1 show), Billboard Live Osaka (1 night, 2 shows), and Billboard Live Tokyo (2 nights, 2 shows).

But the challenges weren't over: after flight plans were rerouted [seeing the band members, Gary, Leonardo and the Stick Men’s designated '4th man' – sound engineer and sonic wizard, Robert Frazza – arrive from four different departure points (New York, Austin/Texas, Berlin and London), the tour entourage arrived in Nagoya, on February 26th; slated for a day of relax after long flights and a short ‘rehearsal’ and discussion about the music to be performed, at the table in the hotel’s reception hall, prior to the first performance at Blue Note Nagoya, on the 28th. When they arrived at the venue for load-in, rehearsal and soundcheck, the afternoon of the first show, Leonardo received a call from a Billboard Live Osaka representative. It was with extreme disappointment that he informed the band of the news that that night's show would their only performance: Japan's national government had declared a state of emergency, and all public venues were to be closed indefinitely, commencing the following day (February 29th).

Once again, it was time to reroute flights and majorly adjust. Tony Levin, Pat Mastelotto and Robert Frazza decided to fly back to the USA on March 1 from Tokyo, while Markus Reuter and Gary Husband decided to stay in the Japanese capital for another 3 days – encouraged by Pavkovic, who wished to further document the events and occasion through recording a duo album of the two maestros. There was a sense among the three that the world as we know it was on the cusp of profound changes – ones which would profoundly alter life, going forward. On a tour where it seemed "Murphy's Law" had reared its ugly head, both this album and the subsequently recorded "Music Of Our Times" – an emotional, evocative, magnum opus duet, channeled through messengers Reuter and Husband – were brought to life.

Seeing first release, the Husband Reuter duet has already received glowing reviews from scores of critics and listeners, alike, across the globe. Perhaps reflecting the impassioned sentiments of both the cancelled tour and the impending crisis facing humanity, the music reflected the pensive fervor of the moment in a poignant, deeply honest and personal manner.

This Stick Men’s album – the aptly named OWARI (which translates from Japanese to English as "The End") – is also a timeless document. Although Stick Men is one of those groups who record each and every live show, the group knew that this lone performance was destined for an album pressing. Not just because of the volatile, devolving nature of the tour which fell apart; nor, the financial hara-kiri destined to be part of the imploded tour's legacy.

This album had to see release because it is truly a monumental performance. Although the low attendance crowd in Nagoya, due to the COVID fear, of the show which only a month before promised to be sold out, may have sensed they were in for something uniquely special, no one could have been prepared for what hit them! Truly, the addition of special guest Gary Husband on keyboards was a stroke of pure genius. From the first notes of "Hajime" (the record's opening cut), there is an ethereal majesty which comes to the fore. This music HAD to be performed; and it begs to be listened to. To say that Gary's work fit into the Stick Men continuum is gross understatement. Although this album marks their first public performance together, and with only a few hours of rehearsal at the soundcheck and some verbal discussion about the music day before the show, Husband sounds more like a veteran group member, rather than a player who sat in with the band for the first time at the day of the show!

Indeed, his contributions here cannot be understated ... a perfect compliment to proceedings. The textural components Gary lends to "Hide The Trees" and the title track (among many) leaves you wondering how future renderings of the song may sound, performed in his absence. His subtle counterpoints to Tony Levin's aggressive bass lines on "Schattenhaft" provide a perfect backdrop for Markus Reuter's soaring, melodic lead work; and his reharmonization / reimaging of "Prog Noir" takes a modern-day prog classic (and one of Stick Men's rare non-instrumentals!) down an alternative path that no one ever saw coming ... profoundly brilliant stuff: it takes a great song, turns it on its head, and makes it an epic!

Every song on OWARI is its own shimmering gem; its multi-faceted nature exposed and brought center stage through the harmonic depths Husband's keyboard work explores. This is supreme progressive fare, showing casing four artists at the heights of their respective creative brilliance.

Special mention has to be spent for Markus Reuter, who produced an intense live recording as it is the band’s studio album, in collaboration with renown Italian audio master engineer, Stefano Castagna, who mixed and mastered the album entirely in analog domain.

Stick Men is a band in constant progression and evolution. As a trio, which has performed hundreds and hundreds of shows all around the world since their inception in 2009 (Markus has joined two original members, Tony and Pat, in the late 2010), as well with special guests, Mel Collins and David Cross of the King Crimson hall of fame, and specially now with collaboration with Gary Husband.

Owari isn't 'the end’ per se, but is the new beginning of the band, closing the 11 years long chapter and starting a new one, and more adventurous one.

As you may already be discovering, the music herein is timeless. Stick Men – for all their many accomplishments -- have never sounded bigger, better or more complete. From the ashes of a steadily devolving – and, ultimately, one-show-only tour – arose this momentous musical document.

Mixed and mastered by Stefano Castagna at Ritmo&Blu studios

Cover artwork by Hajo Müller
Design and layout by Bernhard Wöstheinrich / studioflokati.de
Photographs in this booklet by
Tony Levin and Leonardo Pavkovic

Pat thanks, for years of love and support: John, Garrison and Fuji Maru at DW Japan, Christian at Paiste cymbals, Steve at Evans Heads, Ben at Vic Firth, John at Hammeraxe, Andrew at Roland, Anne at SIMM Audio, Kris at Big Fat Snare, and Mr. Morfbeats.

Gratitude to all the local promoter and crew, especially Masahide Goto of AMSA Records.